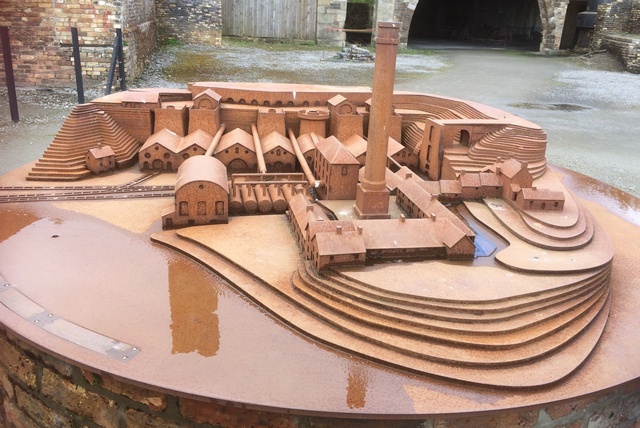 Today I visited Blaernavon World Heritage Centre and Blaernavon Ironworks. The heritage centre is based in a converted school house. It offers an insight into the industrial era and the production of iron ore that went on to be railway tracks and cannon balls. There are displays and presentations designed to bring this era to life.

A model of the ironworks shows how it looked at the height of its production period. A few of the buildings remain in which examples of the tools remain slowly rusting in the dusty old buildings. The ruined furnaces are still visible today as are the remains of the foundry, cast house and water balance tower that raised wagons 80 feet into the air.

The cottages on site have been staged with items that would have been relavent to different eras. This gives you an idea of what living there was like but without the pollution and heat the 6 large furnaces produced.

The edges of the Brecon Beacons were rich in coa,l iron ore and limestone which were the main raw materials of the Industrial Revolution. Blaernavon came about because of this.

They forged the tools, machines and engines. These were used to build the railways, ships and bridges at the start of our modern industrial socierty.

It started in 1789 when steam was used to power the blast furnaces of Blaernavon. Just 100 years later Sidney Gilchrist Thomas invented a method to remove phosphorus from iron ore to make steel.

Blaenavon was owned by infamous ruthless industrialists but they would have been nothing without the workers to run the furnaces. The work was hard, hot and with small reward but at least housing was provided for some. They were expected to work 12 hour days, seven days a week. You would have found children as young as 5 being put to work which took many years to be banned.