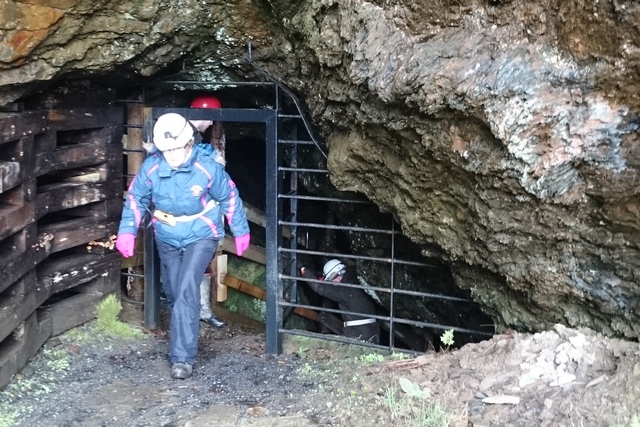 The Dolaucothi Gold Mine are famous for the rose coloured Welsh gold used in royal wedding rings. There is evidence of Bronze age mining followed by Romans, Victorians and Edwardians. 10 tons of shale and 1 ton of quartz produces 1 ounce of gold. Not commercially viable even if it’s value is three times that of other gold.

You can visit this National Trust site in Pumsaint Carmarthenshire. You can go on three different tours, depending on the season, both above and below ground. They last approximately one hour. Our guide Sam was entertaining and informative, a really interesting visit. 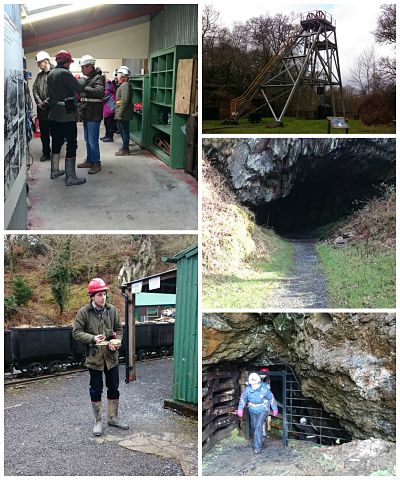 The mine yard sits in a wooded undulated area mainly shaped by the excavations. These were both open cat by the Romans and underground tunnels mainly by the Victorians.

The Romans began the first extensive mining of Dolaucothi between 70AD and 80 AD. They created large open-cast workings and digging several adits (tunnels) to extract the gold.

Most of this was achieved using nothing more than picks and hammers in what must have been very hard labour. Some of the original pick-marks, which are almost 2,000 years old, can still be seen during the Roman Tour.

There was an aquaduct system to bring the water from the rivers to scour away the top soil and wash the crushed rock.

Why they came or indeed heard of the gold mine remains a mystery except that the precious metal was one of the reasons for their invasion.

The Victorian and Edwardian Era

The most active period of mining at Dolaucothi in the Victorian/Edwardian Age occurred around the turn of the 20th century, at the same time as the opening of the first South African gold mines and the famous Klondike Gold Rush.
The main problem remained the small proportion of gold making the operation very expensive. The most sussessful was a Cornish mining engineer, James Mitchell, who had experienced the South African gold rush first hand. He made a profit in his first year and was convinced to keep going until 1909 when dwindling returns again made the mine unviable.

The final attempt to find a new vein resulted in Mitchell striking the remains of the Roman workings and flooding the rest of the mine. This brought to an end the commercial mining. It did however open up the end of the Roman mine and this is the way you exit your tour. You exit on the same hand carved steps that were built 2000 years ago.