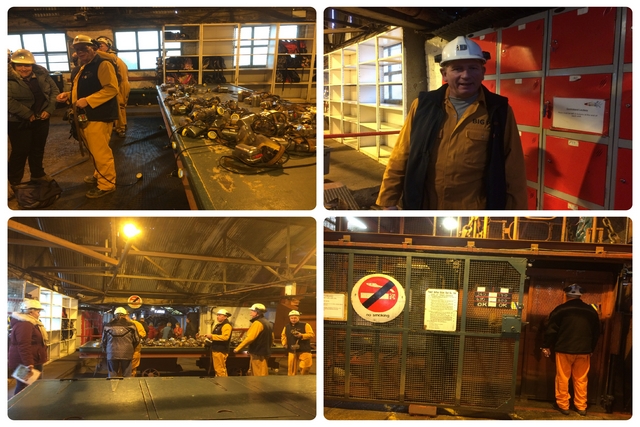 As part of our Brecon Beacons Ambassador scheme we visited Big Pit National Coal Museum at Blaenafon.The site sits high on the Blaenafon moor exposed to the Welsh weather. Below it are the rows of terraced houses where the miners once lived. Now home to commuters from the neighbouring cities like Swansea, Neath and Newport.

When the mine closed over 100 years of coal mining came to an end. It was decided to preserve and share the experience of the Welsh miner in a museum. There are still real ex miners that take you 90 metres underground in the same cage as they used though thankfully quite a bit slower. Our guide Steve had worked in the mines for 35 years and as you can imagine had a few tall tales to tell .

He made you feel like his first guests of the day and that he was really pleased to see you. Some of the stories brought home to you the reality of working underground both for him and the ones that came before. Conditions had improved over the years with machinery taking away some of the back bracking work but it was still a dangerous place to be. Afterwards we went on a tour of the bath house.

This facility is now a museum but still retains many of the major improvements of a miner’s life that it brought like showers , clean clothes and a canteen. It even has a water bottle fill station which is quite ironic considering our current move away from bottled water. So proves we can still learn from the past. The Museum is set in a unique industrial landscape, designated a World Heritage Site by UNESCO in 2000. It is in recognition of its international importance to the process of industrialisation through iron and coal production.

Entry is free which is another bonus.