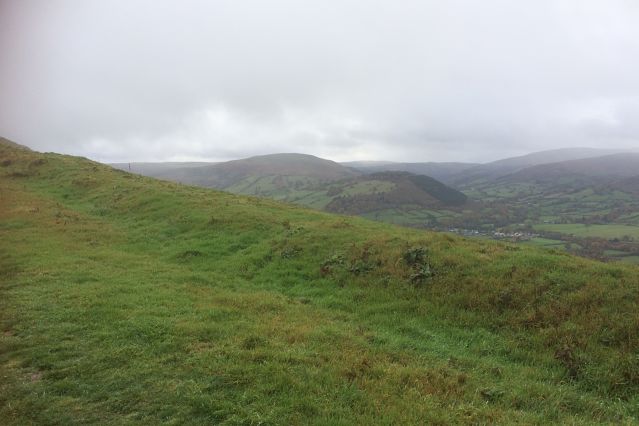 Today I visited Allt-yr-Esgair Hillfort an area of the Brecon Beacons between Llangorse Lake and the A40. You will see many hillforts in the area. One of which Pen-y-Crug is close to the coach house. The Iron Age hillfort we visited today  does not have the five rings where the embankments were. You will however be able to see the ancient burial mound. As with many of these burial mounds they have been raided over the centuries to varying degrees. It is believed this one has been heavily distubed. You will see signs of the rocks being moved and built into cairns and walls where there were none before.

Allt-yr-Esgair is a hill with panoramic views of the Usk Valley to the west and south and across Llangorse Lake to the Black Mountains to the northeast. In Welsh, Allt-yr-Esgair means wooded slope of the ridge. Locally, the hill is known as The Allt.The summit (393m) is crowned by a hillfort presumed to be of Iron Age origin, one of several in the Usk Valley. The Roman road linking the Roman fort of CICVCIVM at Y Gaer, Brecon and Gobannium Abergavenny runs along the ridge.

The arrival of the Highland Cattle

The actual area had become overgrown with bracken and trees and was no longer supporting the wildlife. The farm adjoining the Allt proposed a clearance plan. They would introduce Highland cattle who are able to graze these exposed areas. Within a few years the grazing restored the Allt to the open upland it used to be, along with the wildlife.